2015 has seen some pretty momentous changes for our family, as well as hugely encouraging improvements – we are all hopeful as we enter 2016.

Both our boys graduated – Joshua from High School after a wonderful Senior Year at ICSB (International Christian School of Budapest) and Josiah with his Associates Degree in Broadcasting after an accelerated program of two school years in one calendar year from the Colorado Media School. Joshua endured jaw surgery in June and so spent his summer recuperating, though his spring was pretty fantastic – with a class trip over Spring Break to Israel, and then just before graduation there is always a Senior trip to Cyprus for one last fling and some intentional time of goodbyes and praying for each other as the students prepare to disperse all over the globe. Josiah was able to double up on a class later in the year and skip it in the summer thus enabling him to come join us for a couple weeks – besides being an accelerated program, he also had no real breaks so by the time he arrived in Hungary in August we hadn’t seen him in a year. We loved being able to go as a whole family once again to Millstatt, Austria for the Calvary Chapel Missions Conference, with the extra bonus this year of seeing Josiah get baptized there, 23 years after his father was baptized in the same place – it was a special moment for our family. Josiah returned to Colorado and a few weeks later Rachel and Joshua joined him; Joshua is planning on a gap year back ‘home’ and Rachel went to help get him settled (he now has his driver’s license!). Both boys are now working for Panera while Joshua considers classes for next year, most likely starting at Red Rocks Community College and Josiah ponders his future and three possibilities he’s prayerfully considering: remaining in CO for a time and continuing to help with the youth group at Crossroads Church of Denver, moving directly to California where he dreams of working for Disney and would live with our Grandma Willson, or coming back to Hungary for a year or so and exploring some possibilities here including volunteering at ICSB and helping with church youth work. Josiah is also considering becoming a Youth Pastor and is looking at Bible College possibilities. Yeah, much to ponder, and all of it good! Both boys are now living in our house in Lakewood, CO, which had been rented out and then Rachel’s cousin and his wife lived there with Josiah for a year – our boys are now renting it, along with two other roommates, Chase and Christian. And with the house now ‘ours’ again, we’ll be joining the boys there for Christmas this year – our first ‘American Christmas’ since 2009! We’re all hoping it’s a White one, possible, but not always guaranteed in Colorado.

Josiah and Danny in Austria

2015 for our family here in Hungary has been an exhausting year, and yet we’ve seen amazing changes that continue and we have great hope for the rest of this school year and the future. Last fall our daughter Anna Danielle (now going by Danny in a school full of Anna’s) spiraled down into a very scary health struggle. After a couple years of dealing with depression with a counselor, her body joined in on the ‘fun’ and basically shut down. September saw us making one appointment after another with various doctors, often waiting a month before seeing anyone and getting more and more frustrated and scared, as her health deteriorated. By November she was unable to attend school anymore and when a specialist we’d waited a month to see told us she needed more Vitamin D we finally gave up on the Hungarian medical system and made an appointment with a private clinic whose doctors have trained worldwide, many in the US. At this point Danny’s body was sore to the touch everywhere, she had scary concentration and memory lapses, was exhausted continually, had daily headaches, was dealing with debilitating anxiety attacks for the first time, had a very sensitive tummy, seemed to catch a new cold every other week, etc.…her body was hardly functioning. She began new tests in December 2014 to rule out, well, basically everything. Her doctor also suggested, based on her history of depression, that we start her on anti-depressants right away and begin meeting with a psychologist while continuing to run tests on all the physical symptoms. We began 2015 with the diagnosis for Danny of Fibromyalgia, Chronic Fatigue Syndrome and Clinical Depression. Along with lots of extra vitamin supplements and her Prozac Danny also began seeing a Chiropractor and her homeschooling arrived, so she gradually began using her cloudy brain again too. It was a slow, but steady climb and we are so amazed at the strength and courage of our Danny. By May the diagnosis of Fibromyalgia was officially removed. Which means, by default, that all her physical symptoms had been caused by depression, we never knew such symptoms could be so extreme. Depression is not an easy or often talked about topic – and maybe not one you’d expect in a Christmas Letter. And to be honest, if we hadn’t seen it with our own eyes, we’d still be slightly skeptical of how much difference anti-depressant medications can make. We’d gone the counseling route, with wonderful Christian counselors who were able to meet with Danny via Skype video calls – but it wasn’t until she began on the medication, and her brain chemicals calmed down that those counseling sessions were able to really help Danny work through her hurts from our move to Hungary in 2011. And then, slowly, we’ve seen that little bouncy girl we used to know start coming back to us. Danny had really closed herself off over the past few years, and it’s been a joy to get to know her again, and to see her own joy and sparkle returning.

The Chronic Fatigue is still an issue, and there were concerns as the school year began, but with the help of Norbert being able to drive Danny to school each day and give her an energetic start, we’ve seen her strength continue to improve. When school began in September she’d come home and collapse, wake up for dinner and then often go right to bed. Gradually she’d come home chipper and energetic more and more days, more often skipping those naps. She’s gone from keeping score in gym class to slowly participating, and then last week, began weight lifting with some girlfriends after school. She’s also still 16, and life can just be hard somedays, but we remain constantly grateful and often amazed as we compare where we all were just last year at this time, and where we’re at today. God has been so faithful. And as we enter 2016 we can only rejoice, and maybe share a bit with you about what exactly we’ve dealt with in the hopes it’ll encourage you and maybe add to a conversation we need to stop being afraid of having about depression. It took our daughter’s body having a complete meltdown before we fully considered the option of medication, we hope we can maybe save others that pain.

And then briefly – Norbert continues to love his job with Infinitely Virtual and also enjoyed his time last school year as an IT teacher at ICSB and is looking forward to taking up that role again next year. Rachel continues to lead a Women’s Bible Study on Wednesday mornings, and we enjoy calling the International Baptist Church of Budapest our home on Sundays, attending an International church is like a glimpse into heaven and we love it. And each spring and fall we are also blessed to be able to host a Pastor’s and a Pastor’s Wives Retreat, it’s really our favorite part of our life here – Serving those who Serve. We’re praying about the possibility of expanding this year with a Couple’s Retreat, nothing definite yet, still mostly in the praying and dreaming stage. It also continues to be mostly small churches from Serbia that we’re working with, most within the Calvary Chapel family.

We hope this Christmas and New Year’s season finds you well and able to rejoice and celebrate with some family and special friends – we’re looking forward to a family Christmas in Colorado and then a New Year’s trip to California to spend time with lots of Rachel’s family at our Grandma’s house, including a 2 year old nephew we’ve never met! 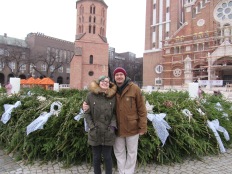