In front of the Parliment in Budapest on Saturday.

We are long overdue for a basic, ‘fill you in on what’s going on and coming up’, sort of update.  There are a lot of changes in the works in our lives, as well as a full and busy summer coming up and we’d love you all aware so you can cover these events in prayer as well as possibly work out to be in the same place at the same time as us.

We’re sadly winding down the Szeged English Club – it has been so much fun to be part of a few students’ lives this short year.  We’ve laughed often, learned about life from each other, and I hope we’ve helped them in their English.  We’ll still be meeting each Thursday through April, but already they’re missing more and more meetings as the season of big tests begin and they need to spend more and more time studying.

Exploring Budapest with some friends…

Plans are moving forward for our move from Szeged up to Budapest.  We just got home from a long weekend up there and it was a productive, educational and fun time.  We were able to narrow down the locations of where we’re house/apartment hunting from a rather general ‘Buda side of town’ to a few specific areas (Budapest was once two cities, Pest and Buda, on opposite sides of the Danube River).  Our time frame is also more concrete.  We will be packing up and leaving our apartment here in Szeged before we leave for our summer visit to Colorado on May 19th – putting our few belongings here into a storage room at Norbert’s mom’s place.  When we return from the US we’ll be able to go directly to Budapest and start the house hunt in earnest thanks to a good friend offering the use of their small apartment that will be unoccupied at the time.  It was really wonderful to get up to Budapest and have time with several friends up there, reminding us again of God’s guidance.  Moving up for the kids’ sakes was really how it all began, but we know God has much more in mind.  One special perk will be the closeness to more friends – not just those in Budapest, but in being able to travel easier from Budapest to wherever.  We also continue to feel God’s Peace over all these steps and decisions, confirming and encouraging us.  It is also interesting how a place, a city we have never felt any affection for, never had any desire to live in, has found its way into our hearts and we know that too is the Lord’s doing. 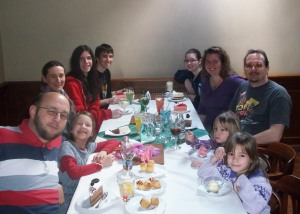 Fancy Hungarian dessert with the Nemeth family in Budapest.

But first, before we get to enjoy Budapest more – we’ll get to enjoy Denver, finally, again.  As I said, our flight is May 19th.  We’ve been blessed by the hospitality of a family we don’t even know, opening their basement to us when we first arrive until we move into a small apartment on June 1st, and then again after we move out at the end of July until our flight back leaves on August 6th.  And for those who know us well, they have a pet bunny – how cool is that?  I love how the Lord works in those tiny details, just to bless us.  We are also so excited about having found an apartment complex that would offer us a short term, two month lease at a price we can afford, and in Lakewood – just around the corner from our storage unit where all our stuff has been stored.  So we’ll have our own little place for the bulk of our stay in Colorado.  We’ll be driving out to California to visit family and for Norbert to connect in person with his work colleagues; we’ll be in the LA area for the first 2 weeks of July.

We are also planning on going through all our stuff and filling up a container and shipping most of it here to Hungary, finally.  It’ll be two years by the time it arrives in Budapest, double the one year we thought we’d be without it all.  That has been an added aspect to our life adventure we did not really foresee.  It has not been that bad, really, but we are all ready to have all our stuff again, to be able to really create a home space again – now with a heightened thankfulness to have such ‘things’ and an awareness that they’re not all that important.

Several other big events that need to happen while we’re back this summer: Josiah will be getting his driver’s license (he’s had his permit since just before we left), Joshua will be getting his driving permit, and Anna will be finding a new place to ride and just BE with horses (any and all suggestions for that one are welcomed!).  We also have a thousand and one little life errands to accomplish.  It will be a very busy few months in Colorado, and then we come back to moving again.  Phew, what a summer!

I won’t advertise addresses and phone numbers on here, but for those who had our Colorado cell phone numbers and were smart enough not to delete them, they will be turned back on shortly after we arrive in May – same numbers.  Send us an email if you want those, we also already know our apartment address in Lakewood.  For two months it’s not worth using the address for much – but you’ll need it to come visit us. 😉

We also regularly send out short prayer updates on a separate email list than the one used for our updates – if you want to be on that list, just send us an email asking.

Thank you all for standing behind us, for encouraging us and for partnering in prayer – God has been answering prayers in amazing ways lately!