Meant to share all this long ago…. Still, two weeks after isn’t’ so horribly late.

We were blessed to be part of a missionary retreat in Croatia, the C.E.O Occasional Gathering of Partners and Friends for Mutual Edification, also known as CEOOGPFME. 🙂 This is the same event that happened last time in our town of Szeged in November of 2011, just after we moved back here. At that time we were just getting to know these great folks in person (been aware of them for years through their partnership and support of some dear friends of ours). I’ve gotten together with the women several times since that gathering in Szeged, and Norbert was able to attend one men’s weekend with them last year too – so this time the gathering was a fun time to see dear friends. Anna came with us while the boys stayed home for a fun bro-bonding time and to dogsit (thankfully they survived the overload of junk food too, as they wondered aloud before we left how much soda they could purchase with the food money we left them – ai, yi, yi!). 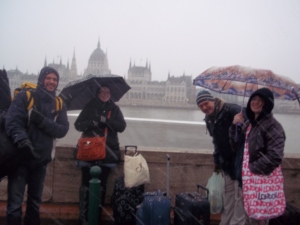 Meeting up and waiting for the bus in Budapest – that’s the Danube and the Parliment Building behind us.

We left Thursday March 14th on an afternoon train to Budapest, where we met up with a large group taking a chartered bus from there to Orahovica, Croatia (and yes, we totally traveled North to then turn around and travel South, but there are no buses or trains to Orahovica and this was the easiest way of getting there – despite being very roundabout for us!).  March is traditionally a spring month here in Hungary, but the weekend of our travel a crazy and very late snow storm rolled through this part of the world.  It began to snow as our train approached Budapest, and was falling thick and heavy as the bus left town around 5 pm and headed south.  The trip should have taken us about 3-4 hours, depending on speed and traffic, getting us to Orahovica by 9pm.  We arrived at 1:30 am.  It was not the snow fall that was really the issue, but that combined with the immense high winds.  Our bus crawled along.  We also stopped for an almost hour rest, the driver needed it.  We learned later that roads were closed behind us, but still not soon enough, hundreds were trapped overnight in their cars on the roads, 4 people froze to death.  It was really, really horrible.  But God got our bus through, and we all arrived safely. 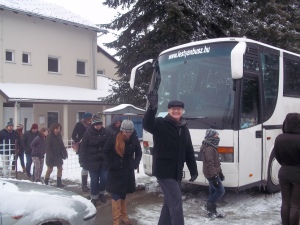 The bus that got us through – and walking to lunch from the church where we stayed.

It was mine and Anna’s first time in Croatia, and technically Norbert’s too – when he was there last it was Yugoslavia.  We stayed in a church that was set up and used as a camp or conference center as well, with two upper floors filled with dorm rooms.  Anna bunked with 7 other single gals, and Norbert and I got a room with 4 beds, 2 pushed together for us.   Jeremy and Petra Bohall are missionaries living in Orahovica and serving in the church there, they were amazing hosts, especially when you consider Petra is 8 months pregnant.  It was a wonderful weekend, full of precious conversations – in English, much laughing, beautiful worship – also in English, guided discussions and powerful question-asking by Tom Foley and lots of yummy Croatian food consumption. 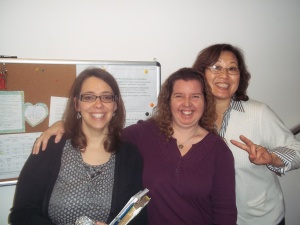 Laughing as Anna Foley did the ‘Korean’ peace-sign in the picture. She and our Anna got to discuss Korea and its language.

It was still cold, but we enjoyed a brisk walk through town. 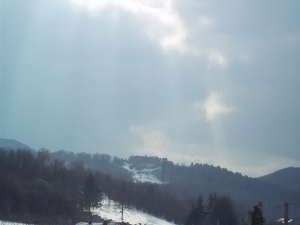 Orahovica has it’s own castle ruins – if the weather had been better we would have hiked up to it – sadly, this was as close as I got.

The goal of the gatherings is for mutual edification, and it certainly worked.  We were also refreshed and encouraged.  And we felt our moving to Budapest was confirmed.  The Lord also gently scolded me for my lack of trust in some of my reactions to my health scares, and then just loved on me.  I needed both the scolding and the love, it was good.

By the ride home Sunday the sun was shining brightly and the much joked about ‘Party Bus’ lived up to its name better than on the scary trip on Thursday.

Remnants of the storm from days before – it was blown into deep drifts along the fields.

The Party Bus heading back to Budapest….