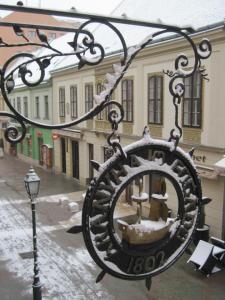 The view from our hotel window in Pécs, it snowed overnight!

Whew, the past two weeks have been crazy; one of those times when I wish I could have blogged more regularly, as I now have so much to share – but it was too stressful and crazy to be able to write.  I shall now try to condense it while still sharing the most interesting bits.

On Wed. Feb 6th I went in for the post-surgery appointment for a final checkup of my mostly recovered wounds from the cyst and mole removal a month earlier.  It was not the simple checkup we expected.  The cyst that was removed was not a normal, simple cyst, but instead was malignant – growing, not cancerous, but still a problem.  They wanted me to come back in for several doctors to consult about it and decide on the next steps.  This was scary stuff, and while I did cry after we left the doctor’s office that Wednesday, I was filled with an amazing Peace from that day on.  The appointment with the ‘several’ doctors was not until the next Tuesday, a long week away – but that Peace prevailed.  I also had a fun girls’ weekend away with six other cross-cultural living women in the town of Pécs, something that was planned months and months ago – and that was so perfectly timed for me. 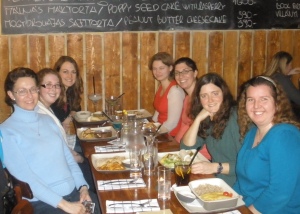 All the ladies in Pécs, eating Mexican (it was awesome!).

Also going on that week were some big discussions and a growing awareness of God’s direction for our family this year.  A huge prayer topic since we arrived here in Hungary has been how to parent our kids here, I think it’s always a parent’s prayer, but we were really asking God how much we push them to learn Hungarian, for friends for them and wisdom in how to get them into social settings that we know they all really need but have been lacking since arriving in Hungary.  Almost two years here, and the kids are all much more alone and not as far advanced as we’d hoped in language learning.  There is not much in Szeged that happens in English, at least not for teenagers.  The foreigners that are here are all mostly university students.  And so the possibilities more readily available in Budapest began to be discussed.  I went away for that weekend and was able to ask questions of some women who know Budapest, at least better than I.

I really love the Lord’s tender timing, as He gave me much to occupy my mind that week beyond any worries about cysts and operations.  Tuesday dawned and my friend Laurie came to the hospital with me and Norbert, we waited and waited and got to talk that whole time, so that was a real silver lining.  As we’re in the waiting room, some people come out of one room and begin to pull the long white wooden benches that line the waiting area into one of the examining rooms.  Norbert joked that it was so more doctors could fit to look at my strange cyst.  We laughed.  He was right.  I was thinking maybe 3 or 4 doctors would ‘consult’ over my cyst, they called my name and I walked into that room filled to overflowing with doctors, I was overwhelmed and didn’t think to count.  Norbert and Laurie thought it was at least a dozen, possibly a few more.  I got to sit on a chair in the middle of the room, one doctor poked at my arm and the mostly healed wound where the cyst had been, poked at the cyst on my lip.  No one asked me any questions; they talked a bit amongst themselves.  When I looked back at Norbert and asked if they should know that my family has a history of cysts, they told me that they’d talk to us later.  We were sent out and got to wait some more.  Again, my Peace level this whole time remained amazing.  The gist of their final diagnosis is that my cyst is malignant while at the same time in a benign tumor, or something like that – both at once. They stressed again that it is not cancer, but the fact that it was growing is of concern, as is the fact that my family has a history and that I already have at least one more (the one on my lip) – they want to run tests to be sure there are none internally, and they need to go back in and re-operate on my arm to remove more of the surrounding tissue, as well as to operate and remove the one from my lip.  I had my first MRI on Thursday, to check my head – and have a CT scan scheduled for March 7th that will check the rest of my body.  After that scan they will schedule the operations.  God seems to be working on my fears, I am still not a huge fan of the medical attitudes here – not their abilities, but the lack of patient care.  Not much information is volunteered, the nurses seem to speak only in clipped and to the point instructions.  I don’t handle hospitals well when I can fully understand everything, so this is a real stretching time for me.

But at the same time we have been praying and it now looks more and more positive that we’ll make the move up to Budapest after our trip to Colorado this summer.  We’re getting really excited about it, the kids are happy – Anna is thrilled.  We hope to spend a weekend or two up there in April, to explore some potential neighborhoods and attend the large Calvary Chapel – which has both Jr. High and Sr. High youth groups.  Budapest has a large ‘expat’ community (expatriate – someone who is living in a country not of their nationality) with many large international companies having offices, so there are families with kids as well as the university students we’re used to here in Szeged.  Budapest is also the ‘center’ of Hungary – all trains and roads go out from it to the rest of Hungary, making it much easier to get from Budapest to anywhere else in Hungary.  We don’t know all God has planned for us from there, but we’re excited about the possibilities, for Anna and Joshua especially.